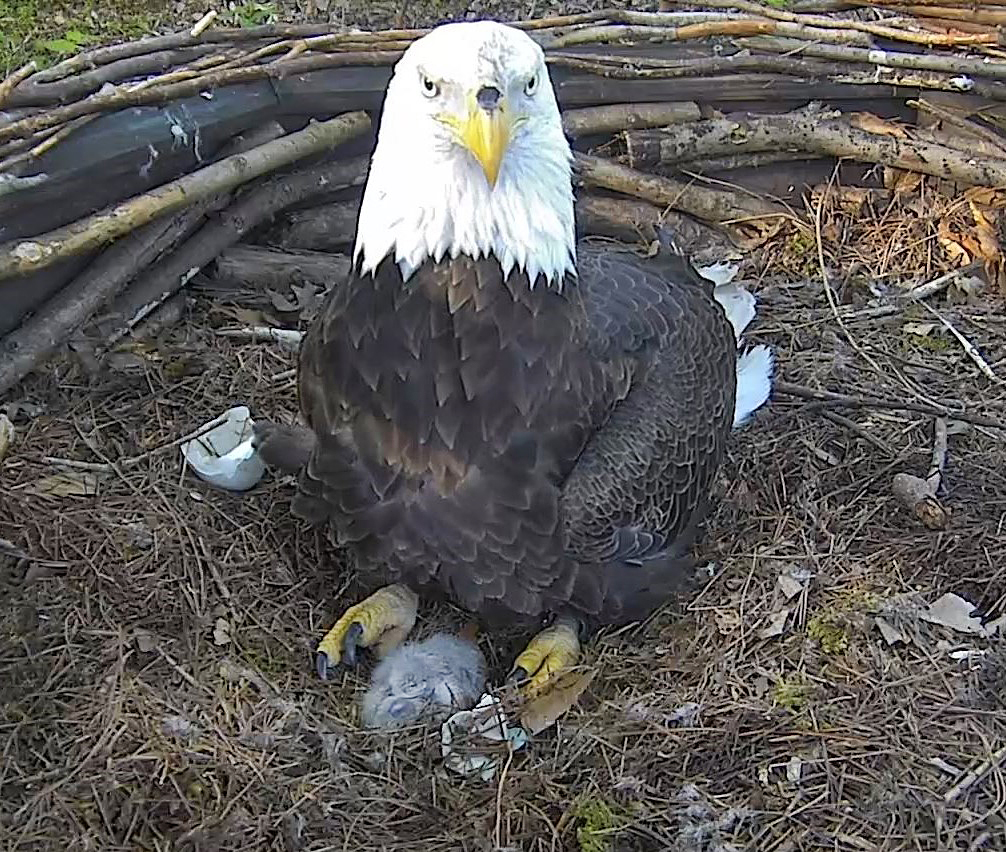 Although the adult eagles were very inexperienced, they quickly developed into proficient and caring parents, and the eaglet, named Awohali (Cherokee for “Eagle”), thrived!

Awohali graduated to the hack tower on Douglas Lake on June 2, to prepare for its release into the wild.

At 14 weeks of age, Awohali became the 176th eaglet to be released from AEF’s hack tower. Weighing 9 pounds, and combined with other measurements made, would strongly suggest that she is a female. She was fitted with Patagial tag # A19, and a radio transmitter was secured to a tail feather in order to track her while she was still in the immediate vicinity. Awohali made a strong first flight, safely landing in a tree.

When an eaglet fledges from an artificial nesting compartment, food is always left at the hack tower in case the eaglet isn’t immediately successful with hunting / scavenging skills. They soon learn hunting skills from other wild eagles in the area, and also often follow vultures who seek out carrion.

For the first time, our TWITCH viewers were able to see the entire release in real time.

Members of the AEF~DW Team watched the release of Awohali with tears of joy as the door to freedom opened Monday, July 29, 2019. it was a beautiful end to the AEF~DW season.

Update: January 3, 2020: Good News! We are happy to announce that on January 1, 2020, Awohali was spotted in Ohio! We’re thrilled to know that this beautiful eagle is thriving in the wild! Photos courtesy of Mike Stone. 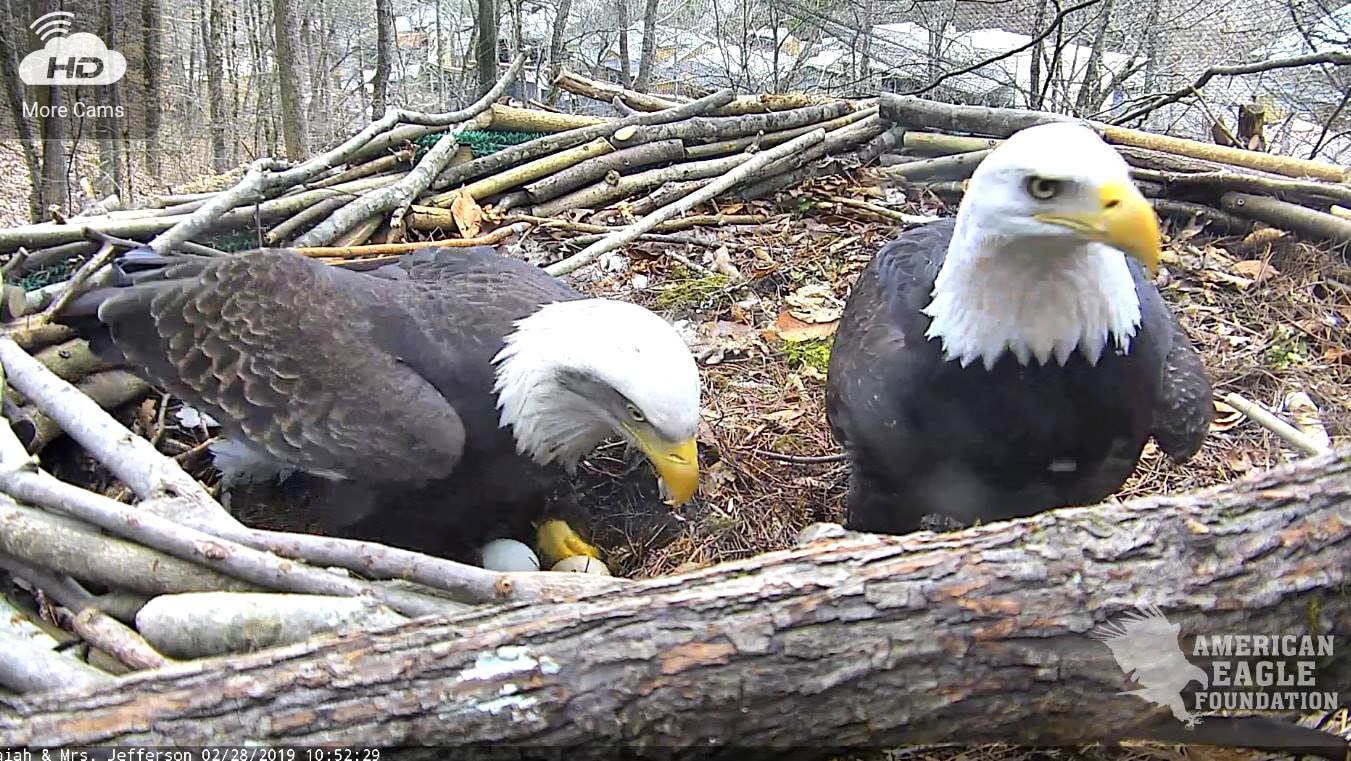 Isaiah and Mrs. Jefferson in the nest with their 3 eggs from this season.

In late spring it was observed that Mrs. Jefferson’s left eye was bothering her, so she was removed from Eagle Mountain Sanctuary at Dollywood on June 2nd and taken to UT Veterinary Hospital for diagnosis and treatment.  She was diagnosed with uveitis (inflammation) in her left eye and has been cured.  It was also determined that her left eye had elevated pressure (glaucoma), so drops have been prescribed for that. We are hopeful that the elevated pressure will be corrected, but we are unsure as to if and when she will be returned to the Dollywood aviary. If it is determined that drops will be required on a daily basis long-term, then she will remain off-site in a quiet place so that she can be treated with safety and comfort. 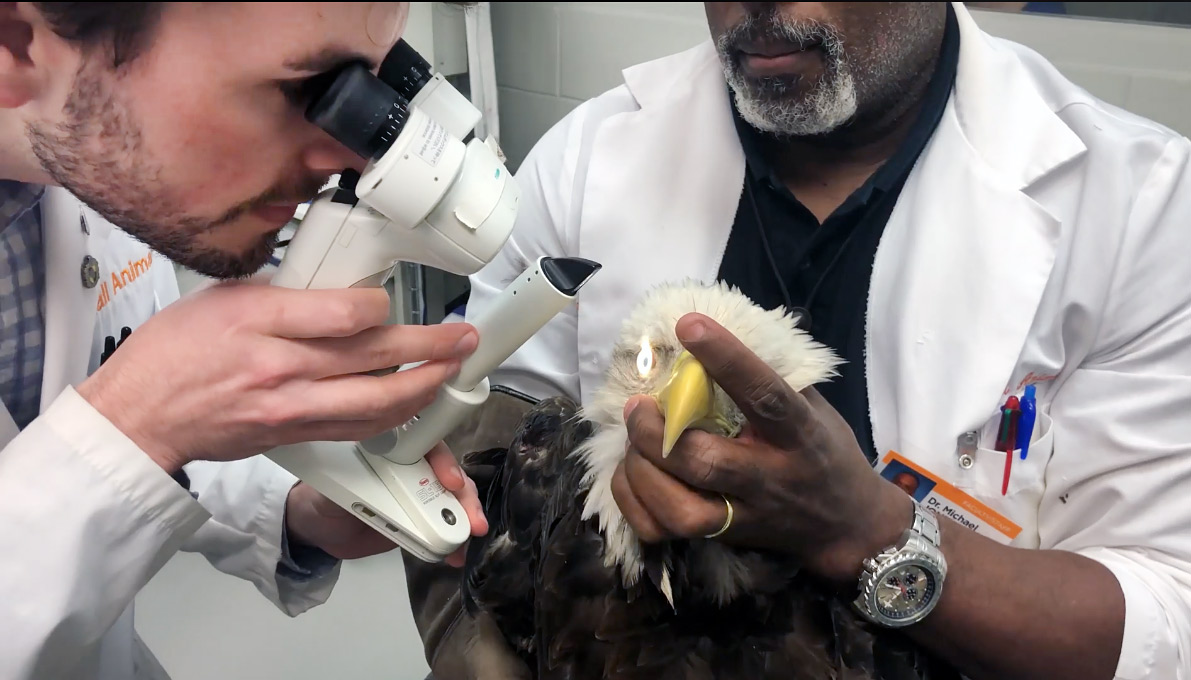 Later in the summer, Isaiah was observed to have a superficial growth very close to the eye that is blind (not his good eye), so he was taken to UT Veterinary Hospital for treatment. He was prescribed a triple antibiotic, and frequent pictures of the area are being sent to Dr. Jones at UT so that he can monitor how the affected area is healing.

Our goal is to get Mrs. Jefferson and Isaiah together again as soon as possible.

Three other eaglets were released from the hack tower this season: one from Southeastern Raptor Center, one from Walden’s Puddle, and one from Florida. All of these three were young eaglets who just needed more time to gain strength before being released.

The AEF’s Captive Breed-and-Release and Hacking programs have resulted in the the release 176 young Bald Eagles and 11 Golden Eagles into the foothills of the Great Smoky Mountains in East Tennessee from 1992 through 2019. The AEF has also supported numerous recovery and protection projects in other states and has assisted with more than 100 other releases in Tennessee.