The 2018-2019 nesting season of Romeo and Juliet began predictably, as their routine observed for over a decade was like clockwork—with Juliet continuing to be the boss!

However, their “fairy tale” life-in-the-wild was the exception – not the rule. Unfortunately, their past season ended in a most heart-breaking and unexpected way.

At the start of the season Romeo was first seen on August 27, 2018 followed by Juliet on September 1. Normal nestorations, bonding, and matings were observed, as documented in our Event Log. 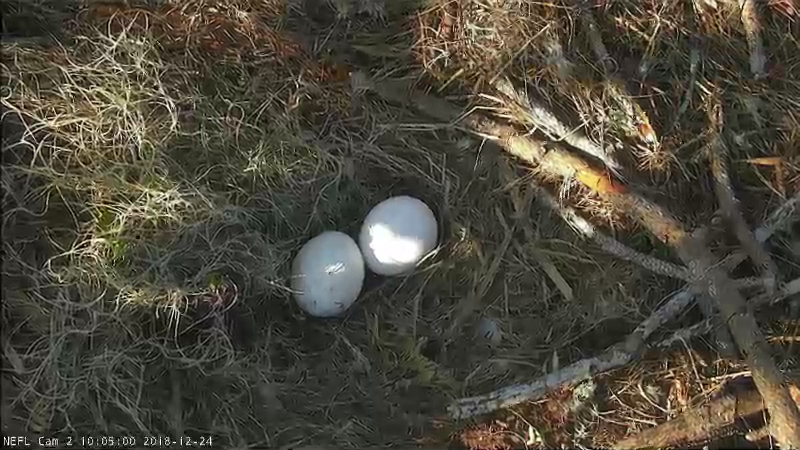 Both Romeo and Juliet carefully incubated the eggs. It was out of character, but observed, that Juliet’s part in incubation waned closer to hatch date.

Florida has a very robust eagle population, and as a result, territorial disputes are becoming more frequent. Unfortunately, and for the first time, this nest was targeted by other eagles. Juliet was obviously off-site defending their nest territory knowing Romeo would faithfully resume the role of incubating for them both. Romeo loved his time on the eggs!

Following an apparent territorial fight as observed by Juliet’s injury (which had occurred days prior), Juliet was last seen at the nest on December 17, 2018. As the sole defender of the nest, Romeo had to cope with incubating and protecting the eggs, while at the same time occasionally having to leave the nest unattended searching for food. A large female eagle was seen following Romeo during this time, often snatching food that he had brought back to the nest. On December 25th one of the eggs hatched, but the hatchling was immediately taken by the same large female eagle, who likely equated the hatchling as food. The other egg was deemed non-viable. Left with an empty nest Romeo vacated on December 26 and was not seen thereafter, as his nesting season was over.

Since Romeo and Juliet left, a number of eagles have found that this beautiful nest in the Hamlet is a great resting stop and a lovely place to visit – or possibly be “home.”

Although we felt great sadness that the nesting season for Romeo and Juliet came to a quick and disheartening halt, we were lifted-up by the appearance and frequent presence of another eagle. This eagle was tentatively identified as Samson—one of Romeo and Juliet’s offspring from 2013! We cannot be 100 percent certain that this is Samson, but by careful comparison of cam photos of young Samson in the nest, compelling similarities were found here. Female eagles have vied for Samson’s attention, yet he seemed to favor two in particular. He was seen with one of the female eagles (A2) frequently on-site and off-site.

However, their “fairy tale” life-in-the-wild was the exception – not the rule. Unfortunately, their past season ended in a most heartbreaking and unexpected way.

At the start of the season Romeo was first seen on August 27, 2018 followed by Juliet on September 1. Normal nestorations, bonding, and matings were observed, as documented in our Event Log. 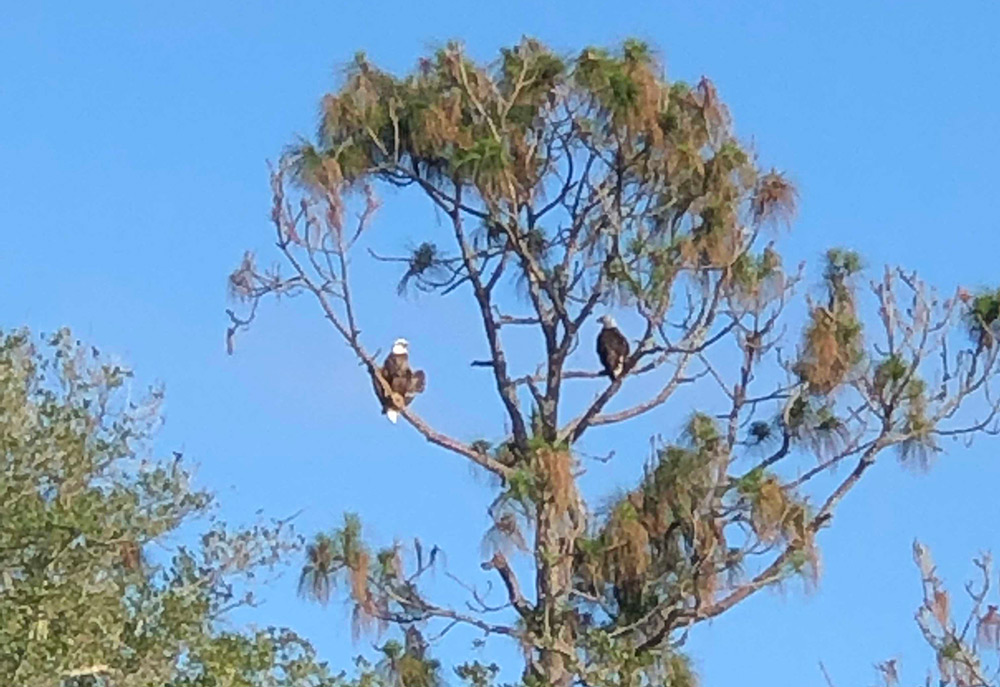 When eagle fledglings vacate their nest, it is common for them to return to their natal area and often to the nest where they were raised – which seems to be the case with Samson. He has been seen in the Hamlet and off-site well into the summer by our ground crew.

Thank you to all who have displayed love, care, and concern regarding the unfortunate outcome with NE20 that took place on Christmas Day. As AEF watched alongside thousands of viewers, we too were broken hearted with the outcome. We truly empathize with our audience who have adopted Romeo & Juliet as their own over the past several years. We hope that our viewers continue to engage with this nest. We remain hopeful that Romeo and Juliet may return at some point. However, we wholeheartedly pledge to embrace the presence of whatever eagle pair makes this special nest “home.”

As nature takes its course, we will be watching alongside you, continuing to learn more about these beautiful creatures on this unprecedented NEFL nesting journey!