ER2, ER3, and HB Graduate to the AEF Hack Tower 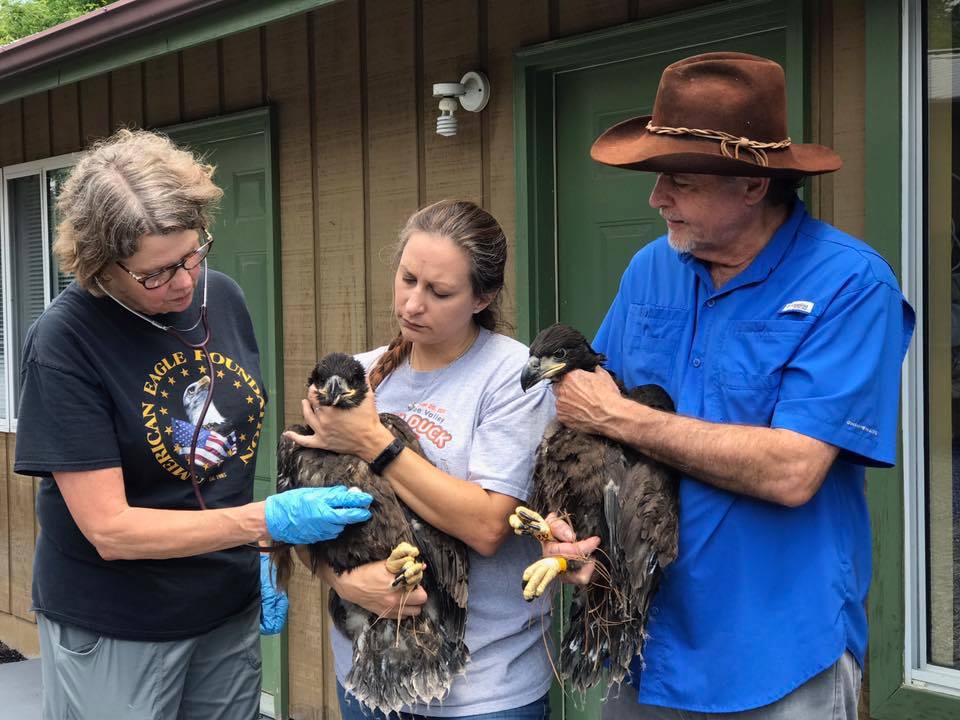 ER2 and ER3, eaglets from the nest of AEF’s non-releasable Bald Eagles Eleanor and Mr. Roosevelt, whose nest is located within the aviary on Eagle Mountain Sanctuary at Dollywood, along with an eaglet hatched by non-releasable Bald Eagle pair Honor & Braveheart (HB), who reside off-site at AEF’s National Eagle Center in Pigeon Forge, are all in excellent health and have begun the second stage of their life in their new compartments at the AEF hack tower on Douglas Lake.

At their physical examination, each eaglet weighed in at 8 pounds. Both ER2 and ER3 are probably males, while HB is most likely a female. ER2 and ER 3 are in one spacious nesting compartment, while HB is in a separate compartment. Settling in quickly, the eaglets were fed chopped fish and quail.

The eaglets’ view is a natural setting of the lake and surrounding trees, and there are also perches inside each compartment which allow opportunities for the eaglets to practice “branching” and “wingercizing.” They will acclimate to their new surroundings over the next few weeks, and after their release at about 13 weeks of age, they could even return with a mate in a few years to raise babies of their own.

While in this lake setting, the eaglets will not come into contact with humans, but the AEF caregivers will be there, unknown to the eaglets, to bring them fresh food and water each day (through sliding drawers), and to make sure they are doing well.

There are now a total of 6 eaglets at the hack tower, and all will be released into the wilds of the Great Smoky Mountains to fly free among others of their kind. The AEF’s hacking program has resulted in the release of 150 young Bald Eagles and 12 Golden Eagles from 1992 through 2016.