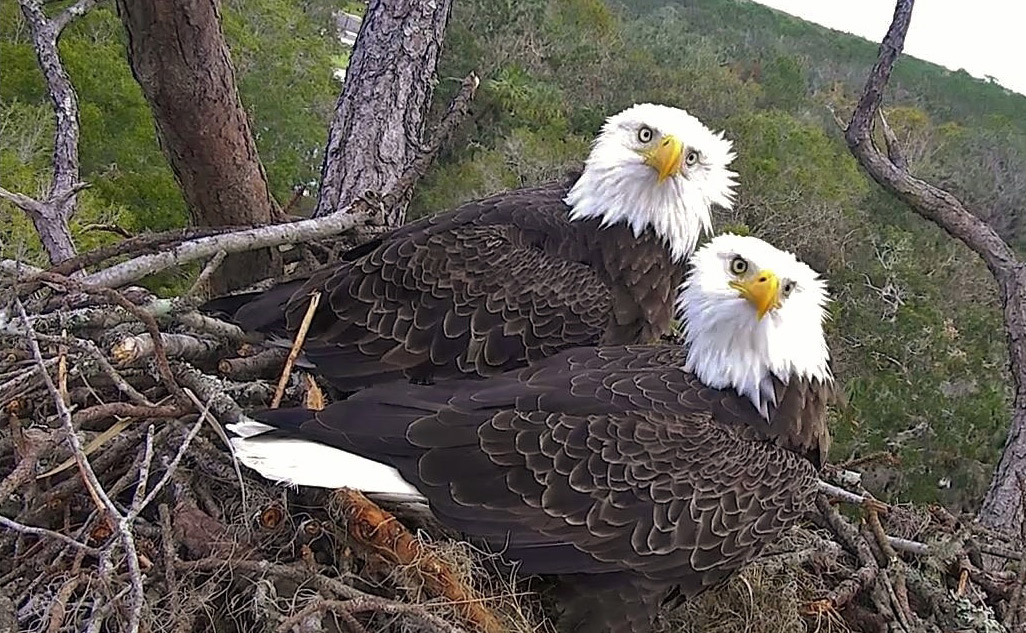 It seems only yesterday that we were all glued to the eagle cams waiting to see 2 beautiful and perfect eggs hatch. Through the magic of these high definition video cams, we’ve shared precious moments in the nest as we watched the eaglets grow strong, held our collective breaths as Peace was rescued and subsequently released, were thrilled when Hope fledged, and rejoiced when Hope appeared with Romeo weeks later, soaring in the sky and zooming by the nest. We watched and waited, hoping there would be a sighting of Peace after his release, but it was not to be. Our hopes and best wishes go to both our fledglings – we trust that they are doing well, and flying strong and free.

This season included a rescue, rehabilitation, & release of Eaglet Peace. We are thankful for all the caring and professional people who saved this little eaglet’s life and gave him a second chance to soar with others of his kind.

For weeks, Romeo and Juliet revisited their home, remaining in the area and delighting us with impromptu appearances. We’ve also seen other feathered friends – ospreys, vultures, other young eagles (perhaps even earlier offspring of Romeo and Juliet), and other native avian species visit the longleaf pine nest tree.

Romeo and Juliet are now off on private adventures unknown to us, but we eagerly await their return in the Fall when once again the cams will capture all the important events of their next nesting season.

See a Timeline of Milestone Events for NEFL nest seasons from 2008 through the 2016-2017 season, meticulously documented by Audubon volunteer and NEFL coordinator Gretchen Butler.

Until then, we invite you to enjoy a season-end video – This one is by chatter Lil Sunrise.

A TRIP DOWN MEMORY LANE!

If you would like to wander down Memory Lane for a more extended journey, the 2016-2017 NEFL YouTube Playlist will provide hours of enjoyment! AEF thanks our volunteer videographers who have contributed their time and talent in creating such never-to-be-forgotten moments.

AEF also would like to express our undying thanks to our Moderators and Remote Cam Operators who make this viewing experience so meaningful for the hundreds of thousands of viewers all across our country and around the world who have watched throughout this season.

Our loyal viewers who watch the cams, learn and share information about Bald Eagles, and advocate for their protection are also deserving of our thanks. Please join us again next season!

Hundreds of photos from this season can be seen on our Flickr Scrapbook.

AEF invites anyone to post photo and video screenshots/screen-recordings captured from these high definition cams. Since these photos and videos can be copied and duplicated over and over, we request that when you post these up to Facebook, IG, Websites, Blogs, or another social media location, the following information be included at the end of your photo/video caption: © 2017 American Eagle Foundation, EAGLES.ORG. These live feeds are the intellectual property of the AEF, and we kindly request that you do not attempt to embed or live stream these feeds on your website, blog, app, etc., or attempt to monetize screen shots or video captures. Thank you for your cooperation!

In order to protect the eagles and their nest, the specific location of this nest is private and cannot be disclosed