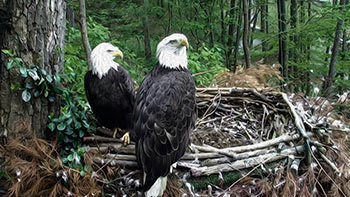 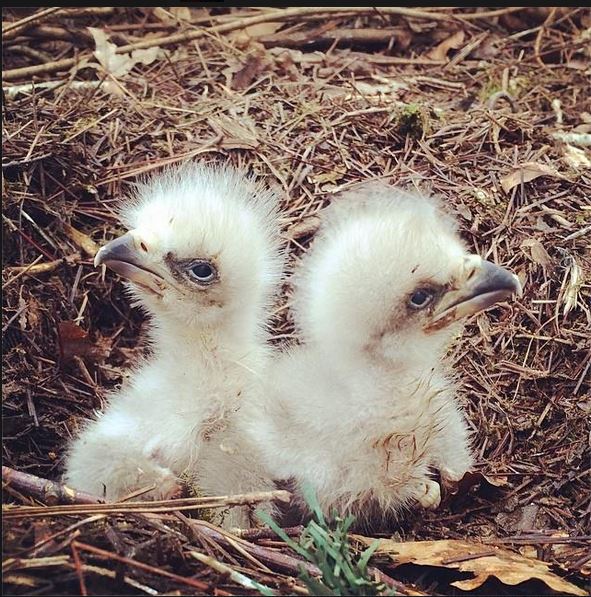 Baby eaglets from the nest of Isaiah and Mrs. Jefferson.

This spring, three pairs of non-releasable Bald Eagles laid eggs inside the enormous aviary at Eagle Mountain Sanctuary on the Dollywood Park. Three eaglets grew up in two nests: Isaiah & Mrs. Jefferson raised their own two, and Hero & Volunteer skillfully fostered a baby eaglet when their own eggs were determined to be infertile. Franklin & Independence, the third pair, laid three infertile eggs and did not raise babies this year.

For the first time ever, the nest of Isaiah and Mrs. Jefferson was featured on our high definition video camera. Vewers and chatters watched these eaglets every day, experiencing all the nest activities and antics of the two babies.

All three eaglets were recently removed from their Dollywood nests and transferred to the AEF’s artificial nesting tower on Douglas Lake in the foothills of the Great Smoky Mountains.

Watch the “Graduation” Video from May 21, 2014,
narrated by Founder and President of the AEF, Al Cecere.

Normally, as we have done during so many previous years, we would be featuring the nest of Bald Eagle pair Independence and Franklin. Due to a storm last summer that caused massive damage to their aviary structure and netting, this pair was temporarily relocated into a different aviary at our off-park facility while the damage was being repaired over a period of several months. Also, the left wing of Independence was slightly injured, which required some rehab treatment away from her mate.

Prior to being placed back into their familiar nesting aviary on the Dollywood Park, the pair was temporarly placed inside a private breeding enclosure located off the Dollywood Park. They returned to a cleaned-up and repaired aviary in February. In early March, Independence laid three eggs. However, all three eggs were infertile.

Today, Independence and Franklin seem to be happier than ever living back at their Dollywood home. The American Eagle Foundation is hopeful that next year will be a successful breeding season for this sensational pair of resident eagles.

The nest of Independence and Franklin can also be seen here. Watch them via our live-streaming HD video cam as they go about their daily activities.