In November 2013, the American Eagle Foundation announced the winners of its 2014 nationwide Bald Eagle project grants. AEF awarded $99,986 for projects within the grant limit of $100,000 for 2014. The following 8 winning projects are listed alphabetically (by lead agency), with most having multiple partners and cooperators: 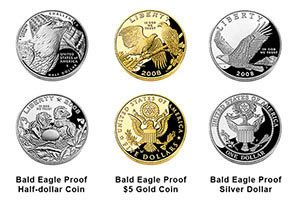 The AEF obtained funding for this grant program in 2004, when both the U.S. Senate and House UNANIMOUSLY passed the Bald Eagle Commemorative Coin Act (signed into law by President George W. Bush).

Congress authorized the U.S. Mint to mint gold, silver, and clad coins, which they sold to the public in 2008. Sales of the coins by the U.S. Mint to the general public generated $7.8 million in 2008, which Congress designated that the AEF utilize for the benefit of Bald Eagles.

AEF set aside 75% of these funds, or approximately $5.8 million, to perpetually grow in the American Eagle Fund to provide competitive annual grants for Bald Eagle projects. These coins can still be purchased on the AEF website.

Grant applications are received from July 1 – September 1 of each year for projects during the next calendar year.

Congratulations to all our winners!