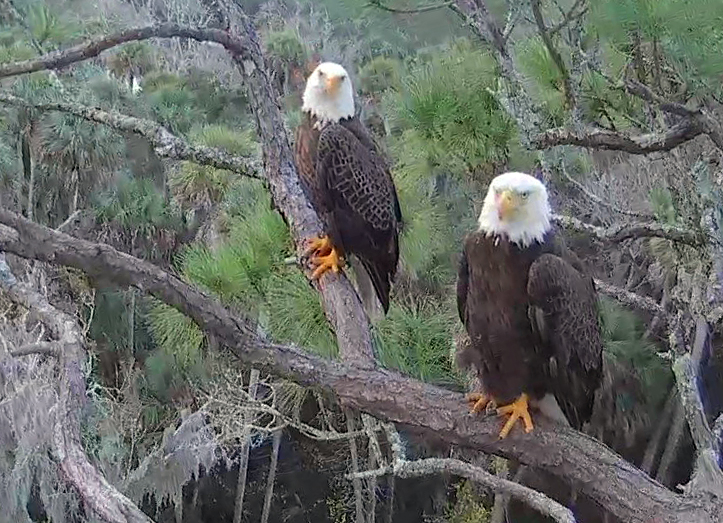 The 2013 – 2014 Northeast Florida Bald Eagle Nesting Season was a terrific experience for the tens of thousands of people watching.  Two eaglets were hatched, grew up healthy and strong under the expert care and watchful eyes of their two loving and experienced parents. Food was abundant, and the eaglets thrived. Sibling rivalry was always at a minimum, and our viewers rejoiced in spending time watching all the activities in the nest.

For the first time ever, the American Eagle Foundation, in collaboration with Gretchen Butler, facilitated the live HD video streaming of a wild Bald Eagle nest in NE Florida.  See how the cams were installed.

Romeo and Juliet, the major players in this real-life adventure, both arrived from ‘summer vacations’ on exactly the same day – August 28, 2013.  For weeks, nestorations were made by both eagles – bonds were renewed, and mating was observed.

During this time, there were many visitors to the nest, and Chatters delighted in seeing Larry the Lizard, owls, juvenile bald eagles (perhaps hatchlings from the same nest), a magnificent Peregrine falcon, and many assorted birds and other critters (in addition to Romeo and Juliet). Our cam operators performed magnificently with dedication and skill, helping to provide a grand experience for our viewers. Our mods are second to none. We appreciate their knowledge and the way in which all viewers are welcomed to Chat.

The first egg was laid November 14; the second on November 17. Anticipation mounted as the 35-day incubation period neared its end.

On December 20th, Romeo and Juliet welcomed Delilah, the first-born into their family; brother Samson hatched December 23rd.   We all felt that we had been given early Christmas presents.

Enjoy the video below, created by Sandy Fink – “From Egg to Fledge”
Romeo and Juliet introduce Samson and Delilah.

For the next 4 months, every new skill learned by our babies was celebrated by the Chatters.

In a short time, Samson and Delilah (the chosen names for the 2 eaglets) became best buddies in the nest, and were often seen snuggling or sleeping together.

This was a happy nest: food was in abundance – fish, squirrel, and water fowl were the main menu items. There was very little sibling rivalry between Sam and Del, and as they got older, they seemed to be best buddies, sleeping and snuggling together.  After fledging, they sometimes flew together.

Del left the area much sooner than Samson – April 7, at 108 days old – while Samson left April 22, at 120 days old. Many of our viewers thought they would leave together, and perhaps they have joined each other by now. Live long and prosper, Samson and Delilah!

The parents stayed a few weeks longer before departing separately. Romeo was last seen May 7, while Juliet lingered 10 days longer, departing May 18.  We look forward to seeing them again in the Fall.

Many photos, as well as endearing videos, have been posted on Facebook and Flickr documenting the season and capturing special moments in the nest.

From the many photos and videos available to us, we have chosen what we hope will be a memorable scrapbook of the nesting season.